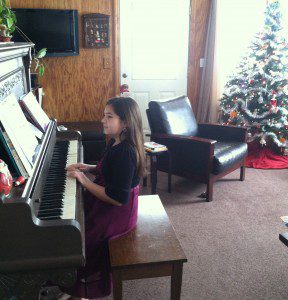 My daughter loves to play the piano. For the last month she’s been hooked on “It Came Upon a Midnight Clear.”  She’s been playing it 13 gazillion times a day. I think it’s some master plan for world domination – or driving her mother crazy. Congrats on being able to play it at warp speed. Now let’s move on!

Trouble is, when she’s learning a new song, it’s torture. Not torture for me – I don’t mind a little clunk and clank. She’s a self-torturer.  Before she even sits down, moans about her impending failure emanate from her little body. I can feel the guttural groans tensing up my body – no question what it’s doing to hers.  New songs are a struggle mostly because she convinces herself it’s going to be, followed by sure statements that she’ll never get it.

And so for Christmas I bought her a couple of books on the power of thought (my not-so-secret way of infiltrating her mind).  I can harp and console and declare her genius until the cows come home (which would be a very long time considering we don’t have cows) and it wouldn’t cease the groaning by much.  But give her a book with cartoon kids telling her the same thing and it’s a revelation.

For the last year I’ve been exploring affirmations and the power of thought. Author Louise Hay has been my inspiration and has turned me on to others with a similar message – that your thoughts create your life.

I knew this before I consciously knew it. When I was ready to leave my job and launch my business, there weren’t many who thought it would work. Most of my family and friends thought I should play it safe – just dabble and try it out before leaving my job. (And honestly my fear was voting that way too.)

Problem was, I knew if I did that, the message I’d be telling myself was that I wasn’t ready, that I couldn’t do it full time, and that it wasn’t that great of a business idea. None of those things I believed. 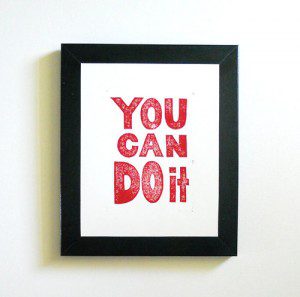 And so I threw caution to the wind and I believed in myself.

A few years later, and almost fifty thousand people served by the business, and I’m learning the finer points of positive thinking. Most recently, I’ve been exploring EFT (Emotional Freedom Technique – aka “Tapping”). For the past many mornings I’ve been sitting on my couch talking to myself while tapping away at my meridian points, working through old issues that may be blocking my progress. It looks a little silly, but it’s remarkable.

It’s the start of the new year and the time for planning and goals. I want every resource in my back pocket.

Many people look at their life, relationships or their work through a series of separate lenses. I want to be able to see the whole picture, the way that my personal beliefs and experiences effect my work – and how my attitude towards work or relationships effects the other aspects of my life.

We’re not disconnected machines with parts that disassemble. We’re a whole, and as such, everything we do or think in one regard, effects the other parts of us.

And spirit. This one is a big one for me, as it’s easy to overlook unless one has a habitual routine of Sunday mornings. But it’s everywhere if only we open our eyes to the amazing world around us.

Last week I was having a crappy day. Just one of those cranky grey days that tend to overshadow my goals and move me in slow motion, causing me to check facebook or play spider solitaire more than I should. That kind of day just tends to spiral – guilt for not accomplishing more piles on top of the grey and causes my crabbiness to be contagious.

And then I went outside to do chores, still carrying my cloud around. Until I stopped and remembered to open my eyes.  Of course my eyes were open, but I was thinking through my clouded mind, looking down as I stomped through the snow. I stopped and looked at the birds who were settling into the tree for the night – and I saw them. I saw their feathers and their faces, their wiggling for balance and position on the limbs.  And I saw their humanity – the energy of their life force. Alive like me. I breathed into it and softened. The cloud began dissipating.

And then I saw the tree they were perching in, equally alive, holding an energy of its own, even in its leafless state. I imagined the tree watching me as I watched it (a wonderfully fun trick I learned long ago that will rock your perception!). I stood in place and turned, taking in the thousands of meadow plants, skeletons of themselves, holding their seed. A shift in perception, outstretched arms to the sky and my cloud had cleared as I breathed in a connection to spirit. It was there all along. 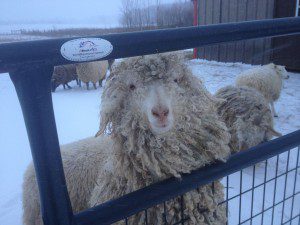 In some Native circles, all of the natural world are given the same respect of “people” – the rock people, the four leggeds, the winged ones – entities deserving of dignity and honor, with a purpose and a contribution. When I open to that and see the humanity in my non-human neighbors, my world explodes with relationship.  And I feel held and fed by the world.

When I can see that in myself, anything becomes possible.

At the start of this new year, 15 years since I partied like it was 1999, I strive to find that humanity – that life force that connects not only my body, mind and spirit, but also my work in the world, my connection to other humans, and the opening of my eyes to the millions of living creatures around me – and the energy that just oozes out of them.

My list of goals is supported by all of it.

As I practice the power of positive thought and as my daughter’s piano repertoire expands beyond Christmas carols, I intend to be that voice who constantly reminds her that she can do it, and that her thoughts do matter. By helping her find her own dignity and humanity – and the resources that feel best to her – whether it’s affirmations, EFT or a cartoon book with a simple message to believe in herself, we can both meet our goals this year.

This world is a beautiful place full of life and support.  Our lives are much too short to be walking around in clouds. What support systems do you use to reach your goals? I’d love to hear about it in the comments below!