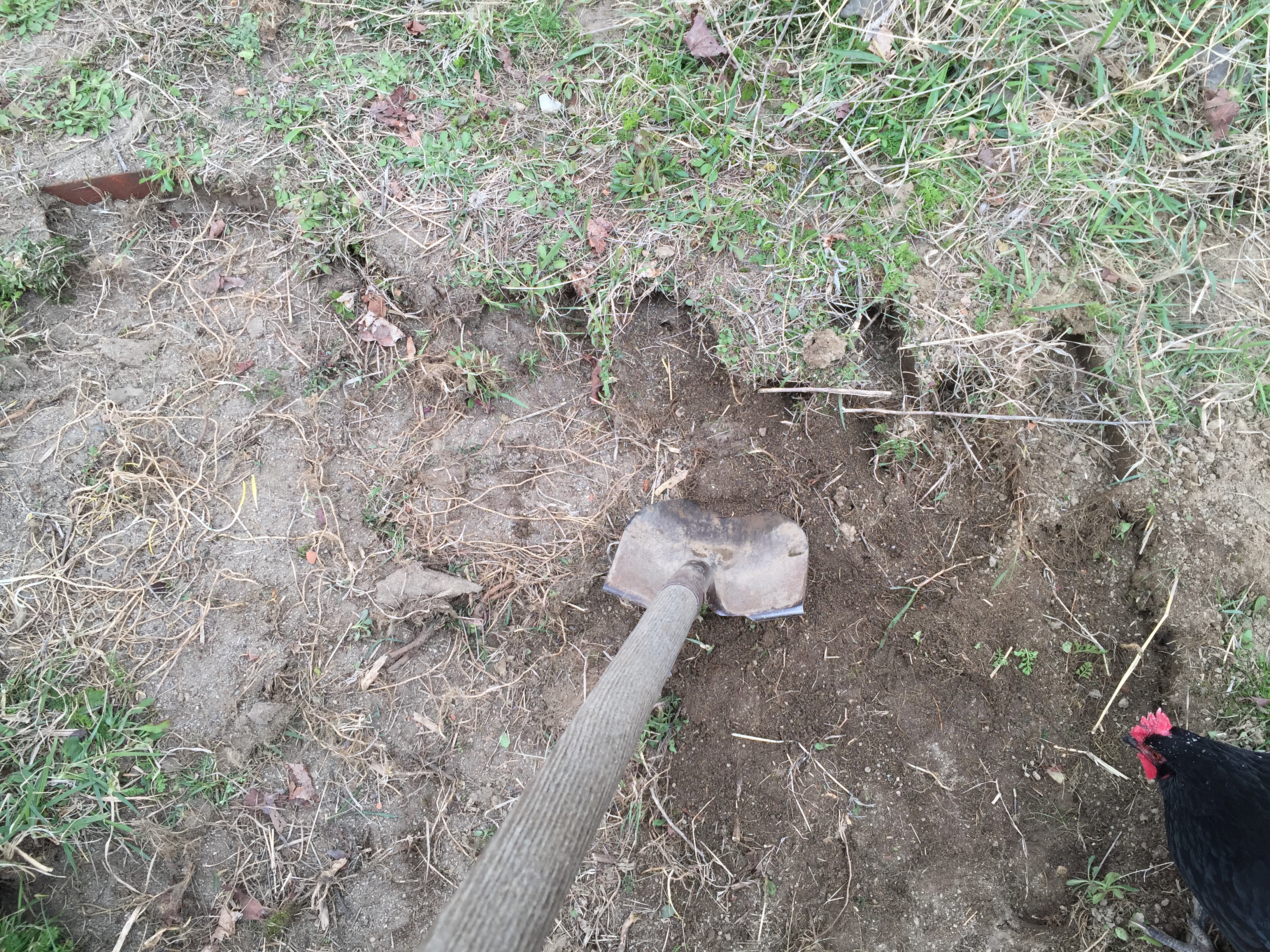 Today I was pulling stones in the garden. Bricks worn and mossy and most hidden under a mat of weeds. Shovel to sand to pop them up, pick them up and dust them off. It wasn’t that long ago that we laid them there. Nine years most. And here they were buried beneath earth.

They had been a vision. Four pathways of stone meeting in the center – bricks circling a center stone that looked like a tree ring. It created such a beautiful division of space. We had benches and trellises and hidden rooms. The pathways made it magical.

And then as things do, the paths started to age, letting soil between the cracks. Seeds sprouted. Plants took root.

We scraped, pulled, and sprayed with vinegar, trying to hold them back. But the bricks succumbed to the weeds – and so did we. We pulled out the first leg of the old pathways last year.

Finding the last of the bricks today, hidden completely beneath plants, was a treasure hunt and frankly a drag. I was melancholy for the beauty that used to be there, remembering the work it had taken to lay it all down. Part of me wanted to save it – I seriously considered digging out all the roots and then laying the bricks back down in place. It had been so beautiful.

But I didn’t. Its time had come. A new design was in the works. New energy had already started flowing into the space.

Digging, I remembered a time in my life I was feeling matted down like the bricks. Years of dirt thrown around and between people, seeds of mistrust and grievances settled in and took root.  It was hard to find my foundation under the weight.  But even though I couldn’t see it, that foundation was still there. I only needed to remove the mats covering me.  It was time to dig things up and make a mess. A new design was in the works.

That new design for my life was unlike any I could have envisioned. It was under the soil of uncertainty that Bring the Farm to You was born.

Here in the garden the time had come too. New energy was flowing and things were getting messy. I needed to let the old design go – to bring up the bricks and create a new foundation.

I feel that energy again – something is in the works. Not only in the garden, but in our next steps as a growing business.

We just ordered a bigger trailer (exciting!) and added new goats to our family (and a new pen to our events!). Big ideas, big inspirations, big dreams.

Last month I had the chance to explore big dreams at a business retreat in Asheville. On the second night I was called up on stage, one of three who had the honor and terror of having their business looked at in front of the 150 people in the room – and also livestreamed across the cyberspace to an unknown crowd around the world.

It brought up some of my dirt. I saw where I stir up the seeds that unsettle my foundation. Those realizations came in the form of limiting beliefs – the stories we tell ourselves (sometimes for decades) so long that we no longer question their relevancy or truth.  Often they’re habitual patterns of belief with little basis in our current journey.  Throughout the 3-day retreat we were uncovering those limiting beliefs and bringing them to light.  There on stage I was pushed to see ways I was holding myself and my business back simply because I believed certain things to be true.

There’s nothing like the glow of the spotlight to call someone out.  I’m still processing the coaching and advice I got not only on the stage but also in the days that followed. Since the crowd had “met” me on stage, I was fair game for their feedback throughout the rest of the retreat. What an incredible gift from the universe!

So now back at the farm, I find myself digging up stones and remembering. Noticing how easy it is to fall back into patterns, allowing the limits to be sprinkled over me, sometimes so casually so as not to even notice. I catch the seeds of doubt I’m spreading, and I see the sprouts of hesitancy start to grow. Sometimes I reminisce for the old design or feel melancholy for beauty from the past. But that’s when I dig, and uncover a brick, my strength, community, support, possibility.  And I start to build again. A new design.

In the garden, that brick can become anything – a path, a wall, a bed.  In my life, the bricks are made from my passion and skills and build my dreams in whatever form I believe in.

It’s there for all of us. We each have our bricks and we all have the likelihood that the years and our own circumstances have covered some of the strength we used to believe in. What are the limiting beliefs holding you back? What new designs are waiting for you?  Share your thoughts below.