OK, I’ll just jump right in.  It was the day of reckoning for the turkeys last week.

To give you a little bit of background, I’m a self-proclaimed persnickety meat eater.  I was a vegetarian for 14 years.  When I was pregnant, I started to eat wild game.  That tempted me into trying locally–grown meat from a small farm.  I want to know where my meat comes from and ideally, know the animal myself.  So this year, I became a farmer.

When we decided to raise turkeys this spring, I wondered how I’d feel about …you know… knocking them off.

‘Cause it turned out that turkeys are a whole lot cuter than I thought they’d be!   I mean, they followed us around like puppies!  If we walked out, they came gobbling and waddling, running across the yard to see what we were doing.  If we were working on something, they were surely underfoot.  They were a pecking pack of turkey-puppies.

They went with me to Bring the Farm to You events, so I had that rare experience of lifting and holding a turkey often, which becomes quite challenging – and a sport really, once they get big.  Carrying them around made very clear how fast my little buddies were growing (and how I need strength training for this job!). 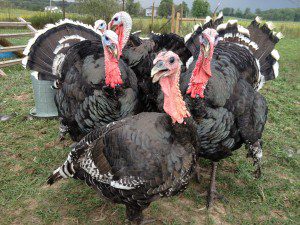 Shirley got to stay home on the day of reckoning.  I knew I was keeping her.  She went to an early event with me and had her wings clipped.  After that she was my buddy and I talked to her and made sure the boys let her eat.  (That’s her in the picture, seductively walking in front of the strutting boys and being quite the tease!)

Since I was keeping Shirley, I had to find her a fine-looking mate.  We picked out her tom on the day before the day of reckoning, because he strutted so proudly and had such handsome feathers!  And they were sticking close to each other so I thought they might like each other.  (I think that’s Tom to the left of Shirley in the picture – he has almost perfect tail feathers.)

The others, 4 toms and one hen, were headed to the Thanksgiving tables of our families and neighbors.  We fed them a light last meal in the back of the pick-up truck.  Food was the way to go with these guys – they’d do anything for food.

They had become voracious eaters!  I was feeding them huge scoops both morning and night, going through almost 75 pounds of food a week.  When I came out with their scoop, they strutted and belly bumped each other out of the way, chirping and clucking, trying to get to the food first.  And after a while, they calmed and pecked and peeped.

These turkeys were not supposed to fly.  Period.  They didn’t stop flying until about a month before D-day.  They were starting to try my patience.  Sitting and pooping on the picnic table is not allowed!

And the sheer enormity of their poop!  I mean really, their poop is huge.  They’d hop over the fence and come hang out and poop on my back porch and steal cat food – and knock over things, the poor clumsy fellows.   I was starting to accept their demise with a hint of a smile.  I think it’s all a part of nature’s way of making us feel better about slicing the knife.

But poop and all, I still liked them.  Despite my talking constantly about how yummy they’d be and trying to imagine them stuffed and steaming, I still really fell for those guys. 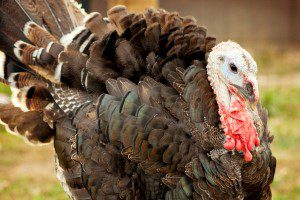 So on the day before the day of reckoning, I fed them an extra large breakfast and the last of the fermented apples from cidering.  I hear wine and bread make a fine last meal.

And I watched them, all breathless from greedily gulping down as much as they could inhale.  I walked around and petted a couple.  And then I did what I wanted to do – think about it.

IT – that thing that we want to deny or forget when we buy a wrapped package of flesh.  These guys were going to die because I wanted to eat them.

So as I inhaled, I said thank you – for their bodies, for their curious spirits, for they joy they brought me.  And as I exhaled, I honored them, bowing for their sacrifice (conscious or not, willing or not) and gave them my well wishes on their journeys.

They were going to an Amish family for butcher.  This family would take care of them and not treat them wrongly.  I felt comfortable and grateful to have them do this deed for us.

Pulling the truck into the turkey yard, we opened the tailgate and put their bowl into the back of the pick-up.  Chris had to lift the first big boy up, but once he was up, all the others jumped in.  We closed the tail gate and watched them.  They seemed unstressed and more concerned about the food than their surroundings.

We gave them a couple minutes with the bowl and then took it out.  Fowl aren’t supposed to eat before slaughter so that they are easier to clean.  But I don’t always follow the rules exactly.  So we let them have a light last meal and put them to bed.

The next morning, Chris was up at 5:30 getting ready to take them the hour and a half drive before his then 2 hour drive to work.  I swear I have the best husband and partner ever!

When I came back from that weekend in Cleveland visiting my parents, the turkeys were all tucked neatly into the freezers, looking succulent and HUGE!

(New farmer mistake – my turkeys are obese.  Two weighed in around 25 pounds and the others around 33.  Gonna have to be a big oven to cook these babies!)

So no drama and the turkeys were in the freezer.  I patted myself on the back for being such a big girl about it.

I did what I had wanted to do – enjoy raising them, know my meat was happy and healthy, and thank and honor them for contributing to my well being.

And now I’m excited as hell to take one of the big guys down to my sister’s in South Carolina for Thanksgiving, hold up a drumstick and give thanks!  I haven’t had turkey for Thanksgiving in 21 years.  This will be a meal to remember!

Please comment below and share the ways you like to give gratitude for a meal.  I’d love to hear how you think about, acknowledge and honor your food!