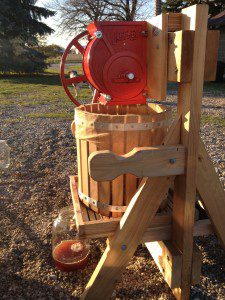 Every time I teach our Apple Cidering program, I’m naturally asked the question – what’s the difference between apple cider and apple juice? Apple juice is on the shelves all year round, but cider is only available in the fall – what’s the deal?

Let’s start exploring this mystery of the world by looking at the color and consistency of each.

I’m sure you’ve noticed that when you cut up an apple, the slices will turn brown after a bit of time.  That’s oxidation – the apple flesh’s reaction to being exposed to air.

When we make cider, the apples get crushed up into bits and pieces – and then those bits and pieces get pressed so that the juice of the apple comes out.  The juice carries with it tiny particles of apples. (If you hold a glass of cider up to the light, you can see them floating around in there.  You’ll also find them settled to the bottom of the jug after it’s set for a while.)

The tiny apple bits in the cider oxidize, making the cider darken up after a few minutes.  If you drink it right then, it’s fresh apple cider – the best the apple has to offer!

If the cider makes it way to a retailer, it’s pasteurized first, both for safety and to hold the cider longer so that it doesn’t start to turn to vinegar or hard cider before it’s sold.

Apple juice on the other hand is finely strained, so those tiny bits of apple are mostly removed.  Since those are the darkening agents in the cider, apple juice is lighter in color.  Sometimes after filtering, the apple juice is concentrated for shipment and then rehydrated later on.  Some companies add extra water to the concentrate, making the juice thinner; some companies also add sugar.

So apple juice isn’t as clear-cut as cider – you have to read the ingredients on the back of the bottle to know what you’re getting.

Apple cider on the other hand, should never have added sugar.  If the cider is “raw”, meaning not pasteurized, it will state that on the label – along with a government-mandated warning.  Raw cider can only be sold by the producer of the cider direct to the customer – never by a distributor.  So if you buy the cider at a grocery store – it’ll be pasteurized.  If you buy it at a farmer’s market, there’s a good chance it’ll be raw – but you can always check the label.

So why the warning on the label?  Well, we all know how dangerous fresh fruits and vegetables can be right?!   Ok, a little sarcasm there, but really, it’s because the apples are fresh and unprocessed.  Yes, we all eat raw apples and they don’t have warning labels on them.  But cider is a processed product, even though it’s minimally so, and consumers can’t take the precautions of washing the apples prior to consumption.

Also, cider apples aren’t usually the pick of the crop.  Actually, they are almost always “seconds,” meaning they’re the ones that aren’t perfect enough for grocery store sales.  They may have bruises or cuts, worm holes or skin blemishes.  Despite their imperfections, they still have so much goodness inside – which is why we cider them rather than composting them.

Remember the spinach and cantaloupe scares?  Those were real issues with fresh produce that caused a good many to get sick.  Bacteria that are present on or in the fruit can do that with apples and cider as well.  So the very young and the very old, and those with compromised immune systems are warned as a precaution.

As technology becomes available to make food safer, there’s the temptation to always use it so that the risk of contamination goes down.  Large food suppliers are known to irradiate fresh food to not only protect consumers, but to preserve the “freshness” of the product so it can be sold for a longer amount of time before spoiling. Not my idea of fresh, but I can be somewhat of a food snob.

Pasteurized cider keeps longer.  It can sit unrefrigerated in a sealed container in a grocery store display for a long time.  Raw cider by comparison needs to be kept refrigerated and will start to “turn” after just 4 or 5 days.  That’s because raw cider has active yeasts, whereas those same yeasts would be killed during pasteurization.

So there you have it! Apple cider is fresh squeezed, pulp and all.  Apple juice is finely filtered with the pulp removed (and sometimes concentrated then reconstituted with added stuff). Both are yummy and delightful on a crisp fall day – or heated up with a sprinkle of cinnamon as winter starts to sneak in!  Cheers!