Categories
Tags
I have a nemesis. She sits and waits for me every day, head cockeyed, eyes following my every move. I haven’t named her, but now that I write about her I think maybe I should. You’ll have to send me suggestions. She’s beautifully yellow – a Buff Orpington laying machine.  And she waits.I kind of feel like the postal lady who drives to my mailbox everyday.  My dog alarm goes off well before she makes her way up to my mailbox. She doesn’t even get out – just has the audacity to stop in front of my house. My dog can’t stand that. What nerve!

Pecky the chicken (now there’s a good name!) apparently feels the same way about me. Now to her credit, I am stealing her eggs, not just walking by her house. She’s the self-proclaimed egg guardian. I’ll reach under her to take the half dozen eggs she’s protecting (peck peck peck at my arm), and then as soon as I’m done, she’ll hop out of that nesting box and jump into another nest of eggs. (peck peck peck at my arm again)  Yeah, she has it out for me.

None of the other chickens apparently feel this way. They seem to get that I give them food and figure their eggs are a good barter. I agree! Most hens will either sit still while I awkwardly fumble underneath them or will jump out to the ground as soon as my hand approaches. After all, it’s feeding time. But not Big Yellow (hmmm, not as fierce sounding as Pecky) – she don’t care ‘bout no stinkin’ food! Not when The Thief has entered the room (I’m guessing that’s what she calls me).

With the ducks I never have this issue.  I rarely find them on their nests – and if I did they’d skittishly jump off and waddle away. And they lay much earlier in the morning than I’m ever venturing into their house. I’ve even been up at the butt crack of dawn doing chores on early morning animal visits and they’ve already beat me to it.  Problem is though that it seems duck eggs freeze faster than chicken eggs.  So in the deep days of winter, I’ve often gotten there too late and have found the eggs already split.  We only have a few ducks laying so the eggs are often scattered in lonely corners.

With the chickens, I don’t gather until evening and the eggs are fine. Lots of chicken butts sitting on eggs keeps them warm throughout the day. (Our 40 chickens share nests, so they each lay their one egg and then move out for the next girl). The chickens are also home-bodies when it comes to the cold. They prefer staying inside and letting their body heat warm up the place. 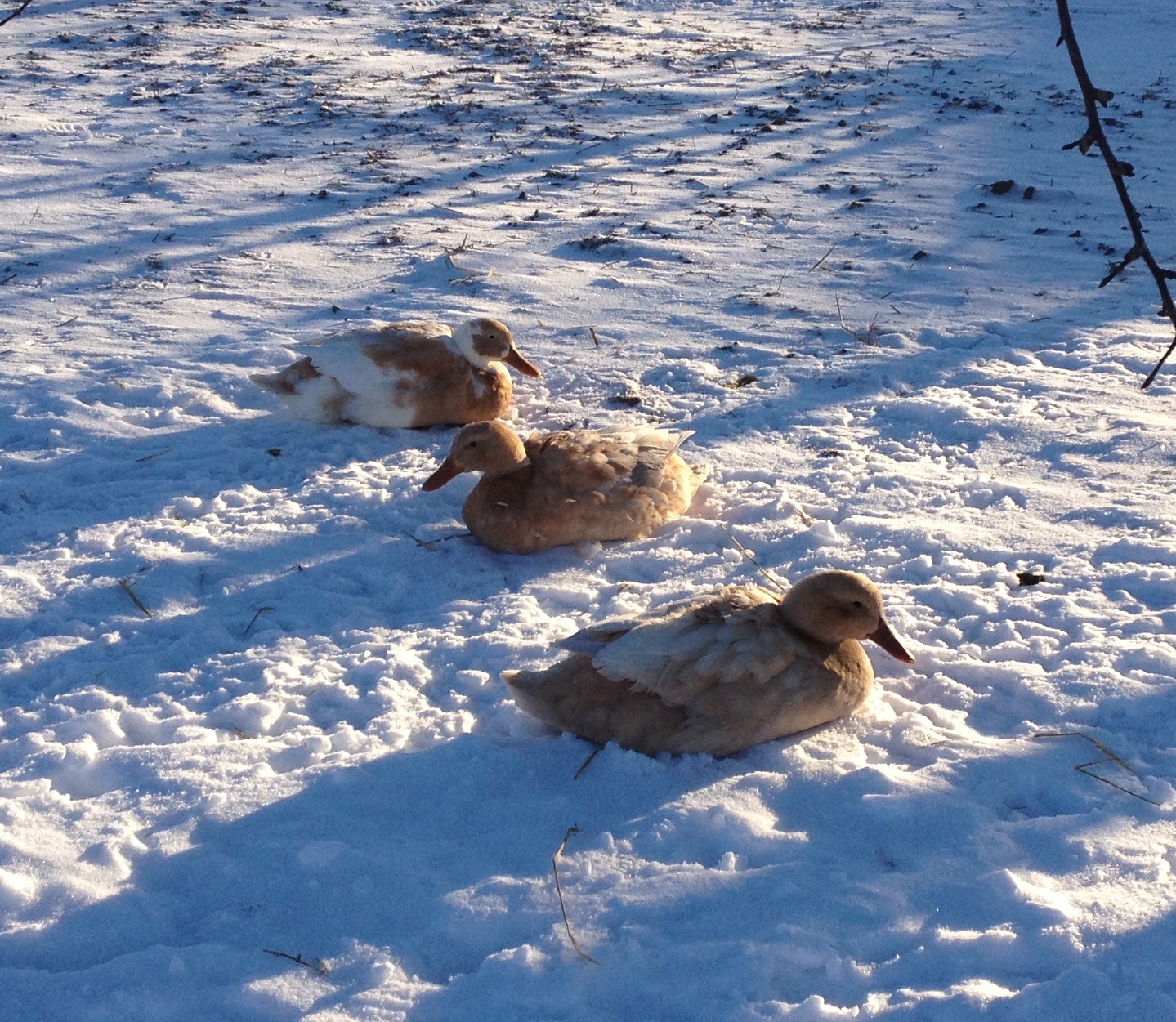 The ducks are like the skiers in the group. They’ll be outside no matter the weather, intent on experiencing the elements.And skiing we have all done with the ice sheet that seemed to cover us up until this last thaw.  Everybody’s been sliding. Fat Charlotte, the eat-everyone-else’s-food goat, thinks she can run on the ice. She can’t.

Poor big Tom, already clumsy carting along his big meaty self, has slip slided around looking like he’s practicing some fancy moves.  I still sometimes boost his big butt up the ramp into the house at night, helping him balance his unwieldy frame.  He can do it without me, but I like that he lets me.

Now Tom, he’s nothing like Yellow Meanie over in the chicken yard. I think Tom actually enjoys my company.

Just yesterday as I was glancing out the window, I saw Tom getting hassled by the male turkey we bought last fall.  That new guy is tall and lanky and when feeling ornery likes to chase other birds around and step on them. Yes, great turkey fun.

Well, Tom is still healing from his late-summer wounds of unknown origin so it worried me that tall guy might hurt him. So I ran out there to break it up. Tall guy ran off strutting and gobbling. Tom stayed by my side, seeming to know that I’ve got his back. His feathers were laid back, his snood (that muscley skin that flips down over his beak when he’s strutting) was unicorn high, a sign he was relaxed. I like that – no need to show off around me, I’m just one of the gang. 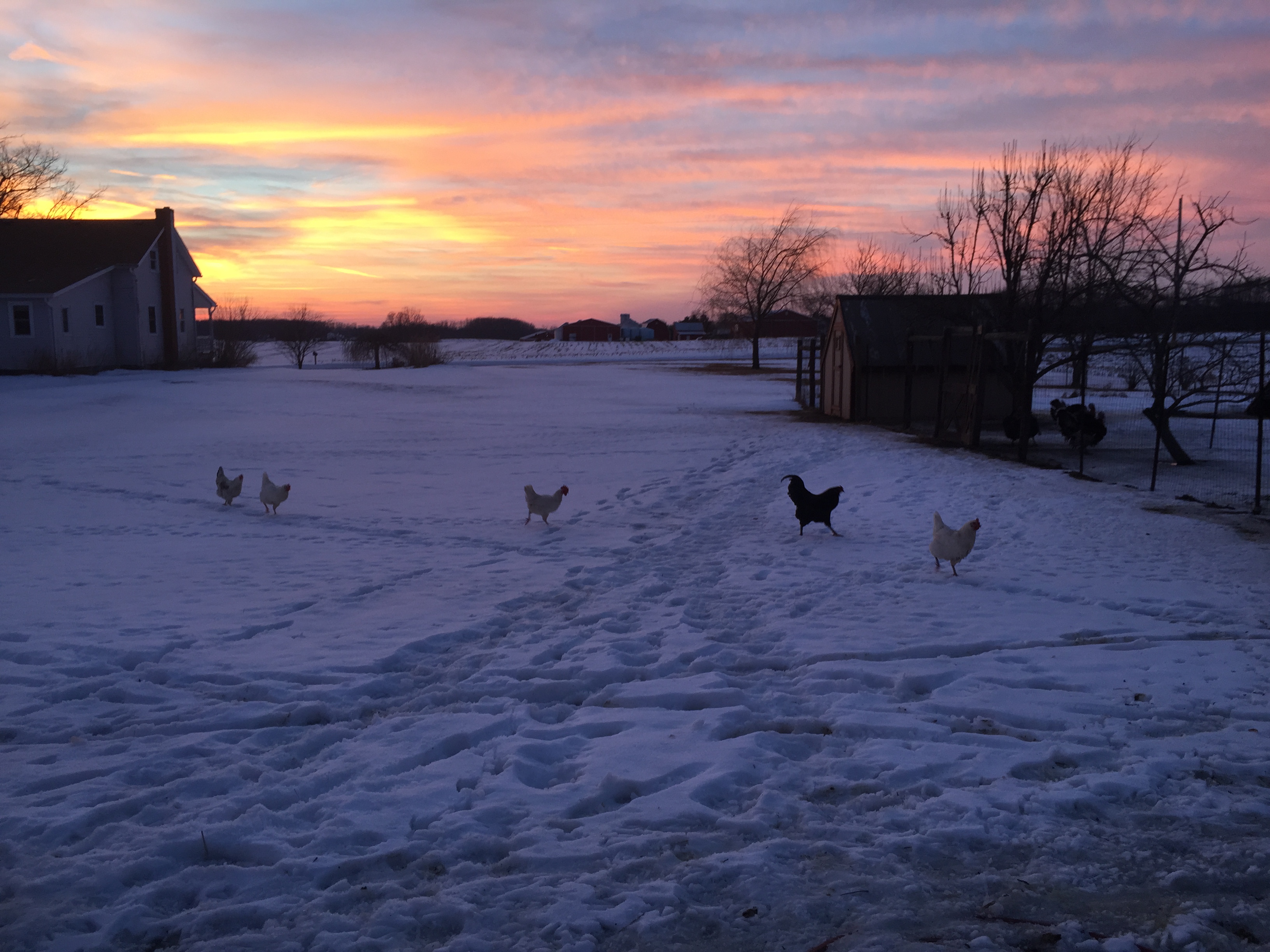 I’m a soft-hearted farmer, so every chance I get, I let the birds wander the farm, free of their fenced confines in the orchard.  Which means that at night, I have to get them all back safe and sound to their quarters.  The chickens are good at it and will march right back to their roosts at sunset.  The turkeys – not so much.

We’ve recently created a walkway between the chicken and duck/turkey yards so they’ve been going back and forth at will. And since turkeys have a brain – well, the size of a bird’s, they often get stuck on one side and can’t figure out how to get back (much to my amusement – as the gate is often right there!)

Tom is one of those that often gets himself stuck.  Sometimes he shows up in the chicken house that isn’t much bigger than he is. He kinda cramps up the place and the chickens all look like “what the heck?!”. Other times he just hangs around the wrong gate, seeming to wonder how he gets home. And so I walk behind him, shooing him towards his house. Slow walking (waddling?) is his style so it forces my compulsively speedy self to slow down, look around, breathe in the chilly air, and then take another step. 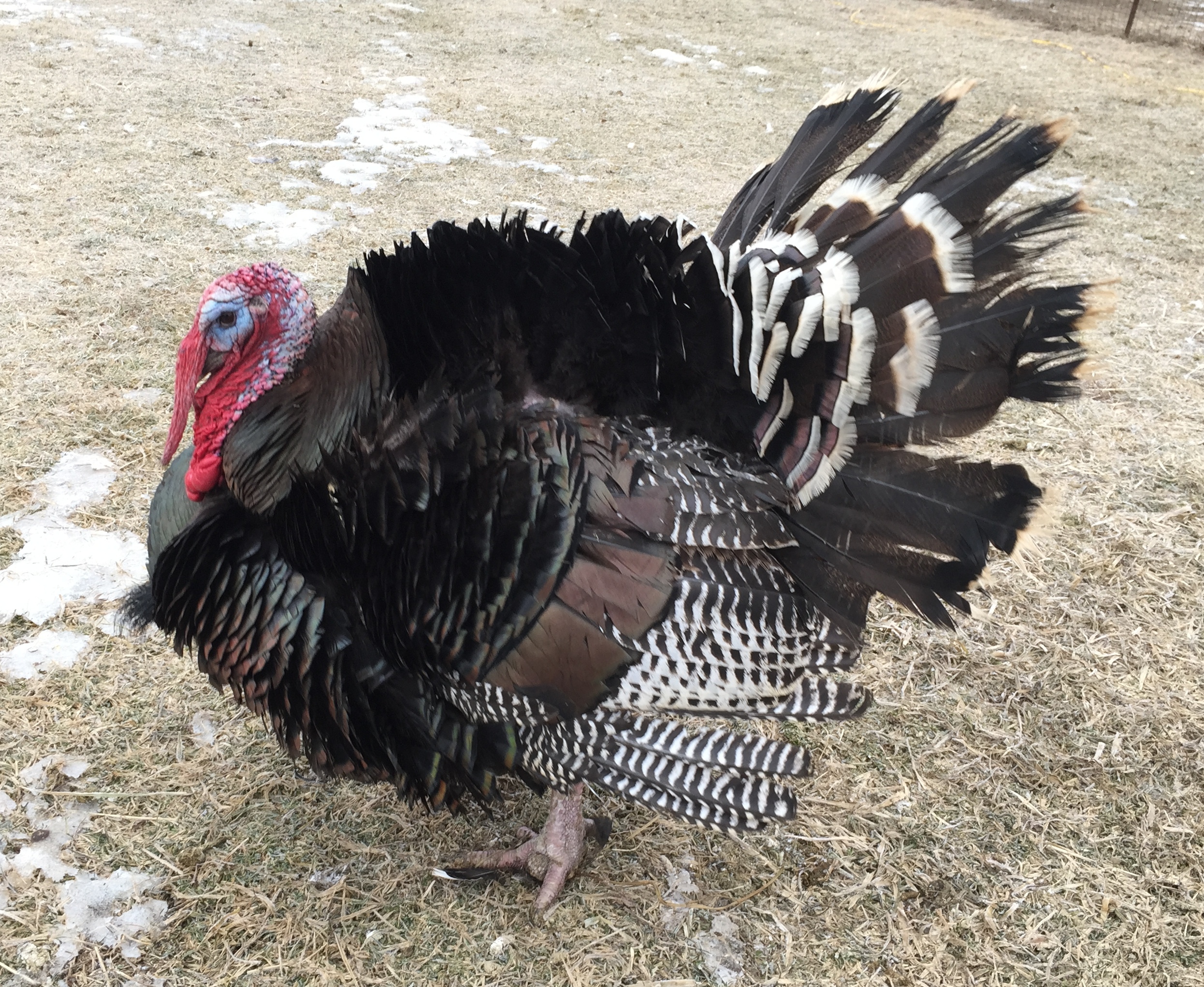 Last night as I was walking him back to his house I thought about how he’s going to be 3 years old this spring. That might not sound impressive, but he’s a Broad Breasted Bronze, meant to live 5 months prior to showing up on your Thanksgiving table.  They’re a fast grower, not meant to live out the good life strolling around a farm into retirement. I feel fortunate he’s made it this long!  Last year he started to develop some growths on his feet between his toes. I don’t know exactly what they are, but it reminds me of the vulnerabilities of his breed.  Many people online share how they tried to keep a Broad Breasted Bronze as a pet (because they so easily attach to people) only to lose them to the summer heat.

And so I’m thankful for each day that Tom is still around, entertaining me as only a turkey can do, and letting me know in his own subtle ways that he likes me. (Don’t we all need a little turkey validation!) And as we start to get little glimpses of winter receding, I pray for a warm but mild summer, if only so that I can keep helping my buddy Tom find his way home each night.

Have a good name for my chicken nemesis? Let me know in the comments below…
Share